Eric Reed: ‘It’s Like a Euphoria That Won’t Go Away’
Oaks Heroine Secret Oath ‘Probable’ for Middle Jewel
Simplification Settles in at Pimlico for Preakness Start

BALTIMORE – The 147th Preakness Stakes (G1) will feature a Kentucky Derby (G1) rematch between upset victor Rich Strike and favored Epicenter, who appeared home free until passed on the inside in the final strides by the 80-1 long shot.

David Fiske, Winchell Thoroughbreds’ longtime bloodstock manager, confirmed after speaking with trainer Steve Asmussen Wednesday morning that Epicenter will run in the May 21 Middle Jewel of the Triple Crown at historic Pimlico Race Course. The Louisiana Derby (G2) winner returned to the track for training earlier in the morning at Churchill Downs, with Asmussen liking what he saw as Epicenter jogged and galloped under Roberto Howell.

Plans call for Epicenter to work an easy half-mile on Monday and van to Pimlico on Tuesday.

“Steve said he was really pleased with how he went back to the track this morning,” Fiske said. “He said he looked great. I mean, we were going. It was just that (Epicenter) needed to tell us that he wanted to go.”

“I thought he traveled well,” he said of Epicenter’s first day back training. “Roberto said he was himself, more of the same. Being himself is a good thing. I thought he took the Derby really well. He laid down like he normally does. He’s been nice and relaxed and traveled really good on the racetrack this morning.”

Eric Reed: ‘It’s Like a Euphoria That Won’t Go Away’

While preparing Rich Strike for a start in the May 21 Preakness Stakes (G1) at Pimlico Race Course four mornings after one of the unlikeliest and most memorable renewals of the Kentucky Derby (G1), trainer Eric Reed was still having trouble wrapping his mind around the son of Keen Ice’s 80-1 victory that shocked and rocked the Thoroughbred world in the first leg of the Triple Crown.

“It’s like a euphoria that won’t go away. I’m happier for the guys who work with the horse than I am for myself. I still have a hard time realizing what we’ve done,” Reed said Wednesday morning from his Mercury Training Center near Lexington, Ky. “We’ve won stakes and a lot of races. We’ve had good horses and regular horses. I look at him and say, ‘Man, we just won a nice race.’ But he won the race. He’ll never just be a horse again. He’s always going to be the Kentucky Derby winner, and that’s what we’ve got to get used to. It’s just hard to imagine.”

Rich Strike, who was claimed by owner Rick Dawson for $30,000 last fall, won the Kentucky Derby for a trainer who had won one previous graded-stakes race and a jockey (Sonny Leon) who rides far outside the national spotlight at Ohio racetracks. The seemingly hopeless outsider surged past favored Epicenter nearing the finish line to pull off a feel-good upset for the little guy.

Meanwhile, it was business Wednesday morning as usual at Mercury Training Center, where Rich Strike galloped under Gabriel Lagunes.

Lagunes, a jockey on the Ohio circuit, has played an important role in Rich Strike’s success.

“He sacrifices a lot of time with this horse. He’s done a whole lot more work than anyone else involved with the horse, to be honest with you,” Reed said.

D. Wayne Lukas said the ultimate decision remains to be made but that Briland Farm’s Kentucky Oaks (G1) winner Secret Oath is “probable” for the May 21 Preakness, a race the Hall of Fame trainer has won six times. Lukas said that Rebel (G2) runner-up Ethereal Road will head to Pimlico Race Course but most likely will run in the $100,000 Sir Barton for 3-year-olds at 1 1/16 miles.

“It could change, but I’d like to run in the Sir Barton,” Lukas said. “He’ll be a short price there.”

Lukas, who won his first of four Kentucky Derbys with the filly Winning Colors in 1988, said he discusses the Preakness for Secret Oath every day with owner-breeders Rob and Stacy Mitchell. If they don’t go in the Preakness, Lukas said the filly will train up to Saratoga’s $500,000 Coaching Club American Oaks (G1) at 1 1/8 miles on July 23. He said Secret Oath will only run in Grade 1 route races from now on out.

“We agonize over it,” he said at Churchill Downs Wednesday morning. “She’s gone back to the track, and she was very sharp out there today. I don’t see anything about her that would change our decision right now [regarding the Preakness]…. She’s training well. She’s bright. She’s sharp and out there playing.”

Asked if Secret Oath could be considered probable for the Preakness, Lukas said, “Yes. You can say probable. Maybe a probable-plus…. If she does that (wins), she’s got a chance to be Horse of the Year, when you step out of the box that far.

“Let’s put it this way: The Derby horses pretty much all had a hard race. Her race was not hard on her,” he added. “Now, you sit back and say, ‘Epicenter is going to be the favorite. Chad Brown is putting that other horse (Wood Memorial runner-up Early Voting) in.’ What I always did on those, is I list all the horses going and say, ‘Can I beat this one?’ Yes. ‘Can I beat that one?’ Maybe. Go right down the line. But I still don’t know who’s going.

“Epicenter will be difficult. He’s a legitimate favorite. He’s a very good horse. Nobody can go over there and think they’ll just run by him. He is going to be awfully tough to beat. You are taking a shot if you take him on,” Lukas continued. “The other thing that always factors in is that when they are really good like she is right now, you take advantage of that moment, that time frame. We’ve got it planned out all the way to the Breeders’ Cup, but there’s a lot of road until then. Things happen.”

Secret Oath jogged a lap around Churchill Downs and then jogged more in the track’s mile chute Wednesday morning under Danielle Rosier.

Simplification Settles in at Pimlico for Preakness Start

Simplification, fourth by 3 � lengths in the Kentucky Derby (G1) Saturday at odds of 35-1, shipped from Louisville, Ky. to Baltimore overnight Monday and arrived at the Pimlico Stakes Barn at 5 a.m. Tuesday.

Simplification, a son of Not This Time, walked the shedrow Tuesday afternoon. His relaxing schedule for Wednesday called for eating, a pair of 45-minute walks and baths. Prada said the bay colt will go to the track with a pony for the first time at 6 a.m. Thursday.

Bobo and her husband, Fernando De Jesus, run a pinhooking business at their farm in Ocala, Florida. They purchased Simplification as a weanling in a private sale with the intention of selling him the next year. When he developed some lower leg issues they held on to him and later decided to race him with Sano. He has a 3-1-2 record from eight starts, a Grade 2 win in the Fountain of Youth at Gulfstream, has earned $665,350, and has taken them and De Meric to the Triple Crown.

Prada, 57, has worked around horses since 1984 in his native Venezuela and in the U.S. He said that the colt showed promise early on.

“When he came to the barn as a baby, he was a nice baby,” Prada said. “Sano waited for months to get the horse into the barn. The first time he breezed, he showed that he was a good horse. Sano took his time with him when he was a baby, and he’s a very special horse. From the first time that he worked at Gulfstream, we knew he was a big talent.”

Trainer Chad Brown has not decided whether he will have one or two runners in the 147th Preakness (G1) on May 21 at Pimlico Race Course. Klaravich Stables’ Early Voting is on course for the 1 3/16-mile Preakness, while Brown said that he is still considering a run with Zandon, who was third in last Saturday’s Kentucky Derby (G1).

Zandon arrived at Brown’s barn at Belmont Park from Louisville, Ky. on Tuesday. The four-time Eclipse Award-winning trainer said he will watch the horse on the track this week before deciding over the weekend whether to enter the Preakness.

Brown and owner Seth Klarman opted not to run Early Voting in the Derby and to point him to the Preakness, the race they won in 2017 with Cloud Computing. Early Voting won the Feb. 5 Withers (G3) and was second by a neck to Mo Donegal in the April 9 Wood Memorial (G2) to stamp himself as a Triple Crown series-caliber runner.

“He’s doing fine,” Brown said. “He’s going to have his final work over the weekend and then we’ll head to Baltimore sometime early in the week.”

Jose Ortiz will ride Early Voting in the Preakness.

Brown is using the same approach with Early Voting that worked with Cloud Computing: skipping the Derby and making the Preakness the fourth career start for colts with graded-stakes experience.

“They are very similar,” Brown said. “Lightly raced coming out of the Wood. They have spacing. The same owner. They have similar running styles. Early Voting has shown a little bit more speed and will be close up front. Cloud Computing wasn’t far away in the Preakness.”

Creative Minister, an impressive allowance winner on the Kentucky Derby (G1) undercard, went back to the track in preparation for a start in the May 21 Preakness Stakes (G1) at Pimlico Race Course. Jockey Brian Hernandez Jr., seeking his first victory in a Triple Crown race, has the mount.

McPeek confirmed Creative Minister is Preakness-bound late Tuesday afternoon. The gray son of 2012 Preakness third-place finisher Creative Cause debuted at Gulfstream Park on March 5, finishing second by a neck. Creative Minister then reeled off victories at 1 1/16 miles in a Keeneland maiden race in the slop and in the Derby Day allowance.

“He’s been a really late-developing colt,” said McPeek, who won the 2020 Preakness with the filly Swiss Skydiver. “Last year as a 2-year-old, he had development issues, just needed more time. We kept giving him more time, and he didn’t make the races until early March. But he’s really shown composure and talent. You don’t get many opportunities for these things. His race Saturday was ultra-impressive. Somebody said that on the Equibase figures that he got a faster figure than the Derby, so we’re going to try him.”

Fern Circle Stables and Back Racing LLC’s Creative Minister was awarded a 108 Equibase speed figure, while Rich Strike’s upset received a 106 in the 1 �-mile Derby.

Cypress Creek Equine LLC’s Un Ojo jogged two miles Wednesday at Churchill Downs under Clay Courville, assistant to his dad, trainer Ricky Courville. The one-eyed winner of Oaklawn Park’s Rebel (G2) at 75-1 odds finished eighth with a troubled trip in the Arkansas Derby (G1). Un Ojo was withdrawn from the Kentucky Derby on the morning of entries with a minor foot bruise, from which he has rebounded to the point that the Preakness is the goal.

“My dad and I decided just to let him jog today,” Clay Courville said. “I’ll see how high he is in the morning when I get here (as far as what they do Thursday). We’re going to take it light on him until Saturday, when he breezes. He’s going good, jogged perfect for me this morning. He’s happy, that’s for sure. We’re on the right track.”

As was the case before the Derby, jockey Colby Hernandez will work Un Ojo, with Ramon Vazquez scheduled to ride in the Preakness.

Junior Alvarado has the return mount aboard the son of 2016 Preakness winner Exaggerator, who finished third in the April 9 Wood Memorial (G2) at Aqueduct.

Owner/trainer Rudy Sanchez-Salomon’s Shake Em Loose is scheduled to breeze Sunday morning on turf at Laurel before it is determined whether the son of Shakin It Up will run in the Preakness or the James W. Murphy, an undercard turf stakes. 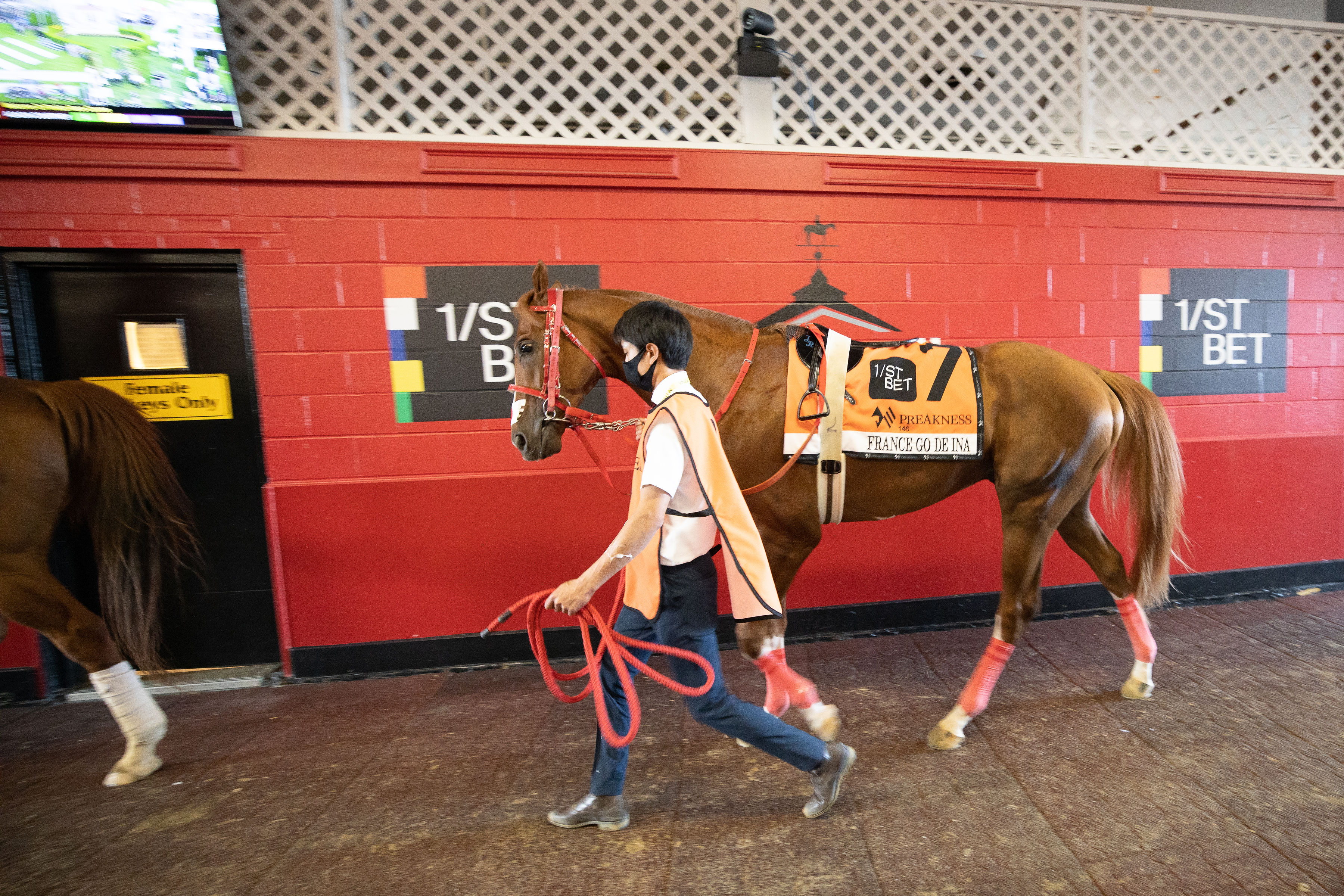 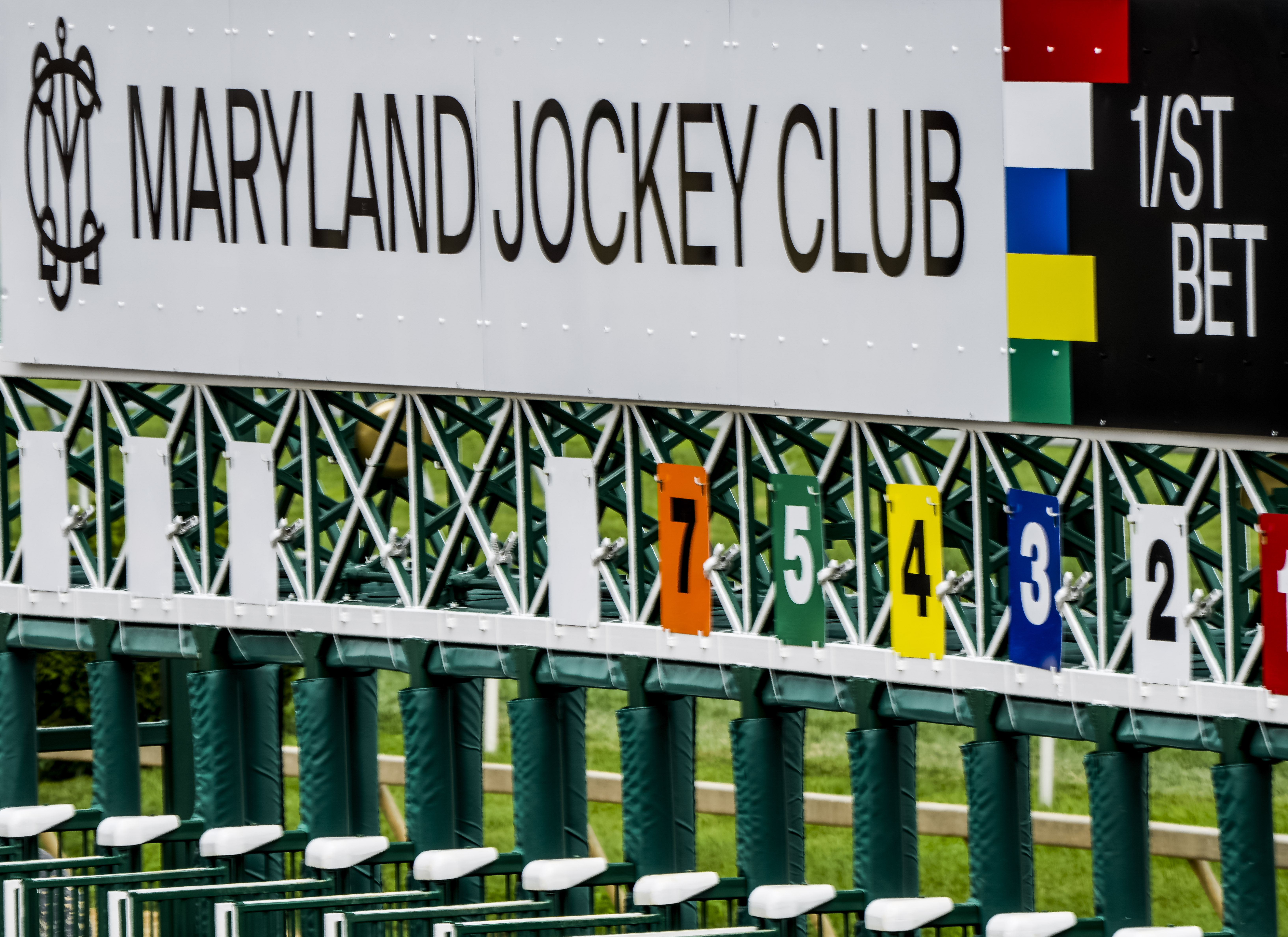