Forecast: Cousin Andrew is a first-time gelding and plummets from straight maiden company into a bottom-rung maiden claimer, so there are two legitimate reasons why he should improve but also get hammered on the tote (he’s 4/5 on the morning line). Now four years old and clearly being culled from the stable, the C. Brown-trained son of Into Mischief has several prior speed figures that are much better than par for this bottom-rung maiden $20,000 level so at this extended sprint trip he should be able to secure a good trip and earn his diploma at a short price.  For protection, you may want to consider We Be There on a ticket or two as a back-up at 10-1 on the morning line.  Drawn comfortably outside and turning back in trip, the T. Amoss-trained gelding figures to be running on late.
*
*
RACE 3:  Post: 2:15 ET Grade: C+
Use: 2-Lockstep; 3-Take the Backroads; 7-Leviosa; 8-Cee Are Em

Forecast: This turf sprint for juvenile fillies is restricted to those that went through the ring for $45,000 in their most recent sale.  It’s a race that requires a considerable spread in rolling exotic play.  Leviosa had trained like a rocket ship at Gulfstream Park prior to her debut last month and, as expected, was knocked down to 4/5 favoritism.  But after a bit of awkward break, the daughter of Kantharos simply had no excuse and wound up a well-beaten, deflating fourth.  Maybe she’ll improve today with that race behind her for a trainer that has very strong stats with the second-time starter angle, the switch to turf, and a good five furlong gate work since arriving at Saratoga.  The fact that she was shipped to a tougher circuit and attracts I. Ortiz, Jr. must indicate that her connections haven’t given up on her, so today will tell the tale.  Take the Backroads, in the money both of her career outings, had every chance but simply got worn down when clearing but missing as the chalk vs. similar on the main track last month.  Perhaps the switch to grass with help, and with Bernstein on the bottom side of her pedigree she has a right to enjoy the lawn.  Cee Are Em shows a bullet gate blowout here last month (:35 2/5) and showed some run when best of a team in a previous move from the barrier in June.  Lockstep had an okay breeze around dogs on turf on July 23 and won’t have to be a world beater to act with these.  We’ll toss her in.
*
*
RACE 4:  Post: 2:49 ET Grade: X
Use: 2-Ifhihadachance; 4-Coffee Bar

Forecast: After finishing a distant second as the favorite in a recent comeback sprint tightener, Coffee Bar should produce a significant forward move in this nine furlong first-level allowance state-bred event for fillies and mares. The T. Pletcher barn is a solid 22% with the second-time-off-a-layoff angle and this lightly-raced, stakes-placed daughter of Outwork, listed at 6/5 on the morning line, really doesn’t have a whole lot to beat.  Ifihadachance is a strong fit on numbers and a seasoned veteran coming off a pair of runner-up efforts at this level.  This nine furlong trip may be a bit problematic for a one-turn specialist but in a race without much pace she should be comfortably-placed on or near the lead.  We’ll prefer Coffee Bar on top but include both in our rolling exotics.
*
*
RACE 5:  Post: 3:21 ET Grade: B-
Use: 1-Funwhileitlasted; 5-Sport Model

Forecast: Most of these exit the same race on June 19, a seven furlong stakes on grass at Belmont Park.  In today’s New York Stallion Series event, they’ll meet around two-turns at a mile over the inner course.  Sport Model won the aforementioned race but today must pick up five pounds.  However, she’s lightly raced with speed figures that continue to rise with each outing and very likely has further improvement in her.  For whatever reason, L. Saez and I. Ortiz, Jr. switch mounts today with the former taking the call on the Shesadirtydancer while the latter picks up the mount on Sport Model.  Funwhileitlasted, a closing second to Sport Model last time out, is a proven route type that should appreciate the trip and an inside draw that guarantees a ground-saving journey.  She might actually be the most dependable ofthe lot.  Let’s boil this down to just two, and in a close call we’ll slightly prefer Sport Model on top.
*
*
RACE 6:  Post: 3:55 ET Grade: B-
Use: 3-Empreses of War; 4-Shamalamadingdong

Forecast: After missing by a neck while almost 12 lengths clear of the rest in a similar maiden special weight sprint for New York-bred fillies and mares last month, Shamalamadingdong is listed at 6/5 on the morning line to earn her diploma in this similarly modest affair.  The C. Clement-trained filly shortens to six furlongs, and while we actually prefer her in an extended sprint, it may not make any difference against this group.  Those trying to beat the favorite should give a close look at Empress of War>, the likely controlling speed who could prove troublesome if she repeats her runner-up effort in the mud at Belmont Park in early June.  In that race she displayed the kind of early speed that could allow for early separation, assuming she runs straight and true.
*
*
RACE 7:  Post: 4:29 ET Grade: B
Use: 3-Convection; 8-Determined Fury

Forecast: This race is loaded with front-running types that even in “lone speed” situations aren’t all that dependable, so let’s zero in on the two best closers and assume that the pace flow will greatly promote their style.  Convection tries grass for the first time after breaking slowly in an off-the-turf sprint at Churchill Downs in his last outing in early June.  A clever winner of his first two career races and a $50,000 claim by T. Amoss in his second start, the son of Constitution remains protected in this starter’s allowance affair and with good racing luck will have an excellent chance to produce the last run.  He’s a fit based on his dirt figures so let’s hope he breaks well today and runs back to either one of his first two efforts.  Determined Fury was a visually pleasing maiden $40,000 winner when last seen in late May in his first try on grass that produced a career top speed figure.  Not much more will be needed today from the C. Clement-trained gelding.
*
*
RACE 8:  Post: 5:05 ET Grade: X
Use: 2-Aunt Kat; 4-Casual

Forecast: Aunt Kat seeks her fourth straight win in this year’s renewal of the Shine Again S. and catches a pace flow that should allow her a fairly easy time of it on the front end.  Fast on speed figures and with the ability to handle any type of dirt surface, the daughter of Uncle Mo had a recent half mile bullet drill in :46 4/5 (fastest of 27) to indicate she’s ready to roll again in her first outing in two months.  Casual will be running on late and seems capable of picking up the pieces and at least completing the exacta.  This seven furlong trip produced her career top speed figure so if ‘Kat doesn’t bring her “A” game (we suspect she will) the daughter of Curlin could make some noise late.
*
*
RACE 9:  Post: 5:39 ET Grade: B-
Use: 1-En Wye Cee; 7-Bodecream

Forecast: There are several legitimate contenders in this difficult third-level allowance nine furlong turf event for older horses, with a couple of major players coming off extended layoffs.  The pace flow is a bit muddled as well, so the best advice is to tread lightly.  En Wye Cee, away since last October when finishing a good third in the Knickerbocker S.-G2, has trained like he should return as well as he left and on two prior occasions the son of Declaration of War has run extremely well fresh.  He’ll enjoy a ground-saving, stalking trip from the rail for a barn that hits at 27% with returnees, so we’ll put him on top. Bodecream has been thoroughly consistent since joining the M. Maker barn, with in-the-money finishes in seven of eight starts, most recently winning a two-other-than allowance event in an off-the-turf sloppy track affair at Belmont Park last month.  His numbers say he’s just as effective on grass, so in his present form the veteran gelding is a “must use” despite the class hike.  We’ll try to get by using just these two in our rolling exotics but if you feel the need to spread deeper, go right ahead.
*
*
RACE 10:  Post: 6:13 ET Grade: B
Use: 2-Be Up; 5-Kitten by the Sea

Forecast: Kitten by the Sea is protected in starter’s allowance affair after being worn down late as the favorite in a restricted (nw-3) $35,000 claimer over this course and distance last month.  She’s probably most effective when able to establish the running but she has stalked and pounced successfully in the past so J. Ortiz has that option if the pace flow dictates.  Be Up was a debut winner at Delaware in June and then performed reasonably well when boosted all the way into stakes company, winding up fourth of six without mishap in the Christiana S. lasts month.  Her numbers are rising and make her a fit at this level, so with another forward move the daughter of Temple City has a big look for the high-percentage J. Thomas stable.  Both should be decent prices and are the two we’ll be using in our rolling exotics while slightly preferring Kitten by the Sea on top.
*
* 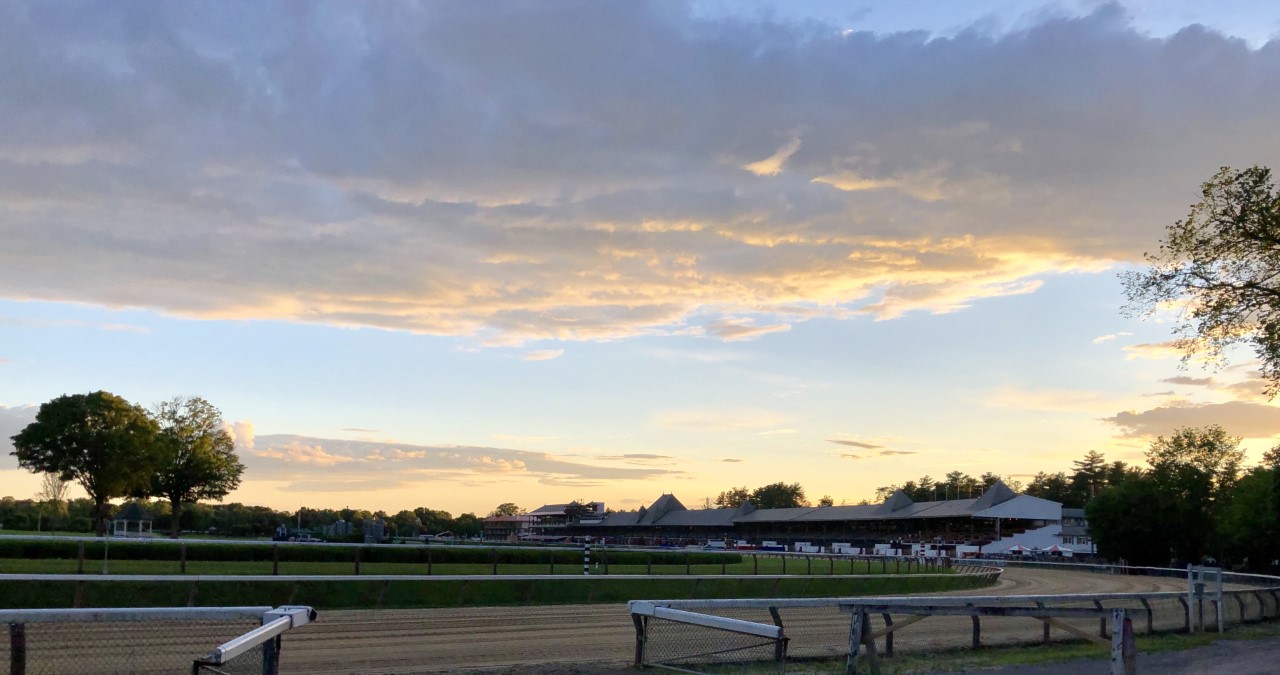 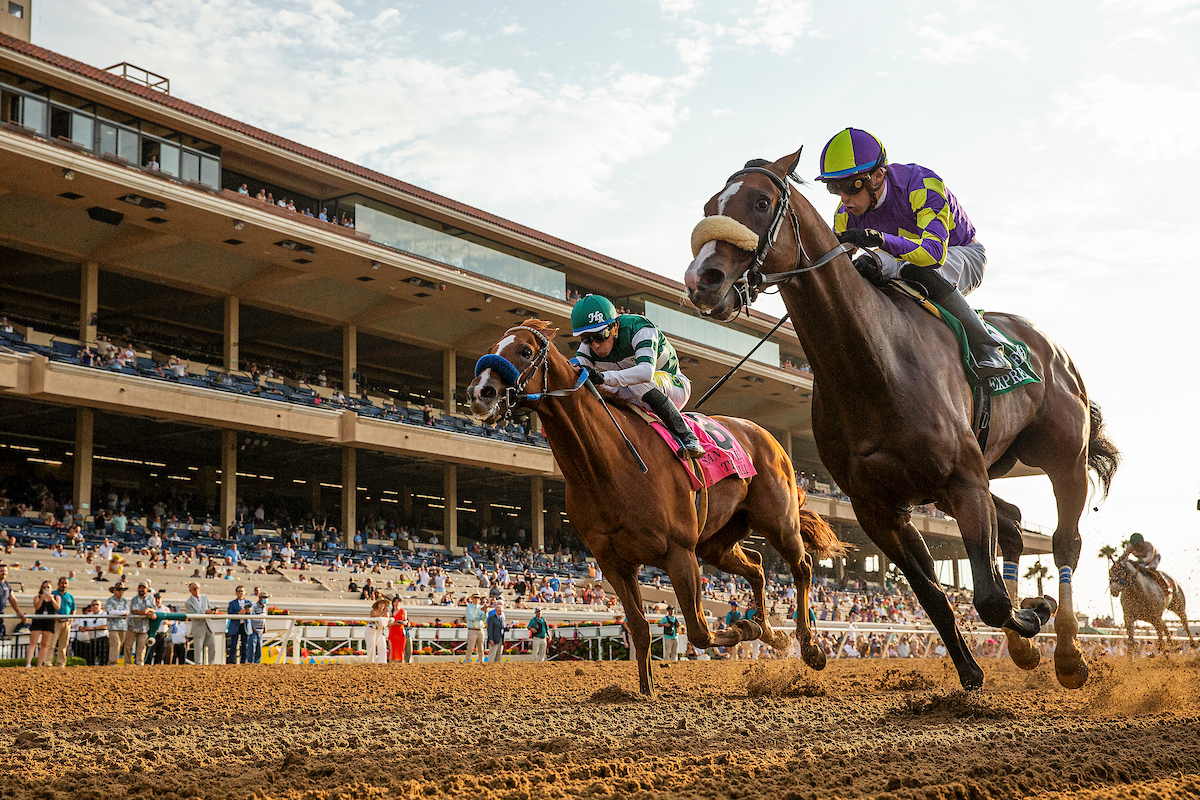