It’s challenging being the champ; walking (and running)around with a bullseye plastered on your hind end. Ever since being honored asthe nation’s top 2-year-old in January, Essential Quality has worn the crownwell. He appeared to be on-the-ropes Saturday in the Keeneland stretch, whenHighly Motivated proved a surprisingly stubborn foe in the Blue Grass but, inthe end, Essential Quality did what champs do: he won…again. Trainer Brad Coxhas to feel confident as his charge has cleared the final hurdle toward theKentucky Derby still unbeaten. It would appear, as they say around theracetrack and at family holiday barbeques, ‘there’s more in the tank.’

How much more? Good question. If the champ really was rockedby Highly Motivated’s punch, it would be a negative heading toward the big raceon the first Saturday in May in Louisville--hometown of ‘The Greatest’ andWorld Heavyweight Champion Muhammad Ali. But, perhaps, in true Ali fashion,Essential Quality might have merely been playing ‘rope-a-dope’ in the Blue Grass,seemingly in trouble while actually in total control?

Either way, the consensus number one-ranked challenger to EssentialQuality’s championship belt is in action Saturday at Oaklawn Park in theArkansas Derby. Concert Tour hails from the Bob Baffert outfit--the top stablefor 3-year-old champions ever—and, based on his last two workouts at SantaAnita, he appears ‘loaded for bear.’ Baffert has used the Arkansas Derby as theperfect launching pad toward Louisville success before and has a mind to do itagain.

If there’s a stumbling block in Concert Tour’s pathSaturday, we can’t see it. He should put his high cruising speed and developingtalent on display for all to see. It’s notable that even though this racecarries 170 points toward spots in the Kentucky Derby starting gate there areno fresh faces shipping in while attempting to add Louisville digits. That’spartly because connections nationwide were repelled by Concert Tour’s vigor inwinning the Gr. 2 Rebel Stakes.

Even if he proves dominant in Razorback country, come May 1,the son of Street Sense probably won’t be favored in Louisville. That’s becausethere’s an unwritten rule that says you’ve got to knock out the champ beforeyou can wear the belt. And, even though Highly Motivated got in a few goodlicks through the Blue Grass stretch, the referee triumphantly ultimatelyraised Essential Quality’s hoof for the fifth time in as many bouts.

Below is one man’s opinion of Saturday’s Arkansas Derby witha suggested play.

This guy finished a well-beaten fourth in the Gr. 2 Rebellast out behind the Baffert duo of #5 Concert Tour and #3 Hozier. That was hisseventh lifetime start and first since October. He has one win—a five andone-half furlong restricted stakes at Lone Star in August--a pair of seconds anda pair of thirds to his credit. He finished third in the Gr. 1 BreedersFuturity at Keeneland, over four lengths behind 2-year-old champ and currentsophomore leader Essential Quality. This son of Dialed In was 40-1 in the Rebeland outran his odds. In fact, he didn’t run badly at all. From the far outside8-hole, he was four-wide into the first turn, steadied briefly early down thebackside, and raced between horses throughout. He finished ok in the lane and barelygot up for fourth, just three-quarters of a length behind runner up #3 Hosier.If he improves off that race and has a better trip, which he might while movingfrom the outside starting post to the inside one, he should be part of theexotics. Exotics

He’s finished behind stablemate #5 Concert Tour twice inthree races and there’s no reason to think he’ll flip the script this time.This son of Pioneerof the Nile had a rail skimming, dream trip in the Gr. 2Rebel last out and finished well enough to hold second. Jockey Martin Garciawill attempt to drop back a bit early, save ground and maintain anotherrail-skimming trip. If that works out, this colt could get another nice checkfor his owners. The morning line price isn’t attractive but he’s a Baffertpupil and was second to the favorite last out. He’s also made just threelifetime starts, so he could have upside. Must use in exotics a bit but is nobargain at the listed price. Exotics Defensively

He comes out of the Gr.2 Rebel along with everyone else inthe field except for #6 Last Samurai. That was this son of Dialed In’s firststart since September and he appeared to need the race. He was running ok untilhe was sideswiped at the eighth pole, losing all momentum and shifting back tohis right lead. This colt showed ability at two and is a Grade 1winner—American Pharoah Stakes at Santa Anita where he defeated Rombauer and Spielberg—twocolts of some repute. He also won a maiden turf sprint first time out goingfive furlongs at Del Mar. Jockey Arrieta replaces Hall of Fame member JavierCastellano in the saddle but no worries, the replacement knows his way around Oaklawn.This is a runner that could improve while having a race under his belt and aclean trip. Count him firmly in exotics. Exotics

Unbeaten in three starts, this colt appears as Bob Baffert’sbest chance to win the 2021 Kentucky Derby. The son of Street Sense faces muchthe same group he soundly defeated in mid-March and there’s absolutely noreason to think he won’t do the same Saturday. He’s got speed, a great postposition, the ability to get the distance and he’s already dominated all butone of these foes. Is he a cinch? There’s no such thing. But he’s as close toone as you’ll find. There may be some concern that he could become embroiled ina speed duel with #2 Caddo River early and that such a confrontation might openthe door for a closer to take advantage. We don’t see that. #5 Concert Tour isquicker than #2 Caddo River and a better horse. If #2 Caddo River outbreakshim, #5 Concert Tour can just sit off that one and take him whenever jockeyJoel Rosario decides it’s time. All considered, a victory in this race will setthis colt up perfectly for a big run at the brass ring in Louisville May 1. WinOnly

Trainer Dallas Stewart is not opposed to taking a shot ingraded stakes races. And he’s had some successes at huge odds. Don’t see thatthis is one of those occasions, but Stewart’s triumphs often are invisible justbefore appearing in the exacta at boxcar payoffs. This colt was 56-1 last outin the Southwest Stakes when fifth, beaten over 13 lengths over a ‘sloppy’track. That was his first start since he beat one horse in an allowance race atChurchill in October. PASS

This really isn’t much of a betting race, but you could playaround with Tris or Supers for some action. #5 Concert Tour is best. Thewonder is how to stack the rest in the proper order. Two runners who couldimprove off previous efforts in the Gr. 2 Rebel are #1 Super Stock and #4Get Her Number. #3 Hosier should run well again, but he got aperfect trip in the Gr. 2 Rebel and he’s a shorter price than the precedingpair. #2 Caddo River may hang around for an exotic slice, but he didn’tlast time going a shorter distance and he’s probably not going to be muchprice. 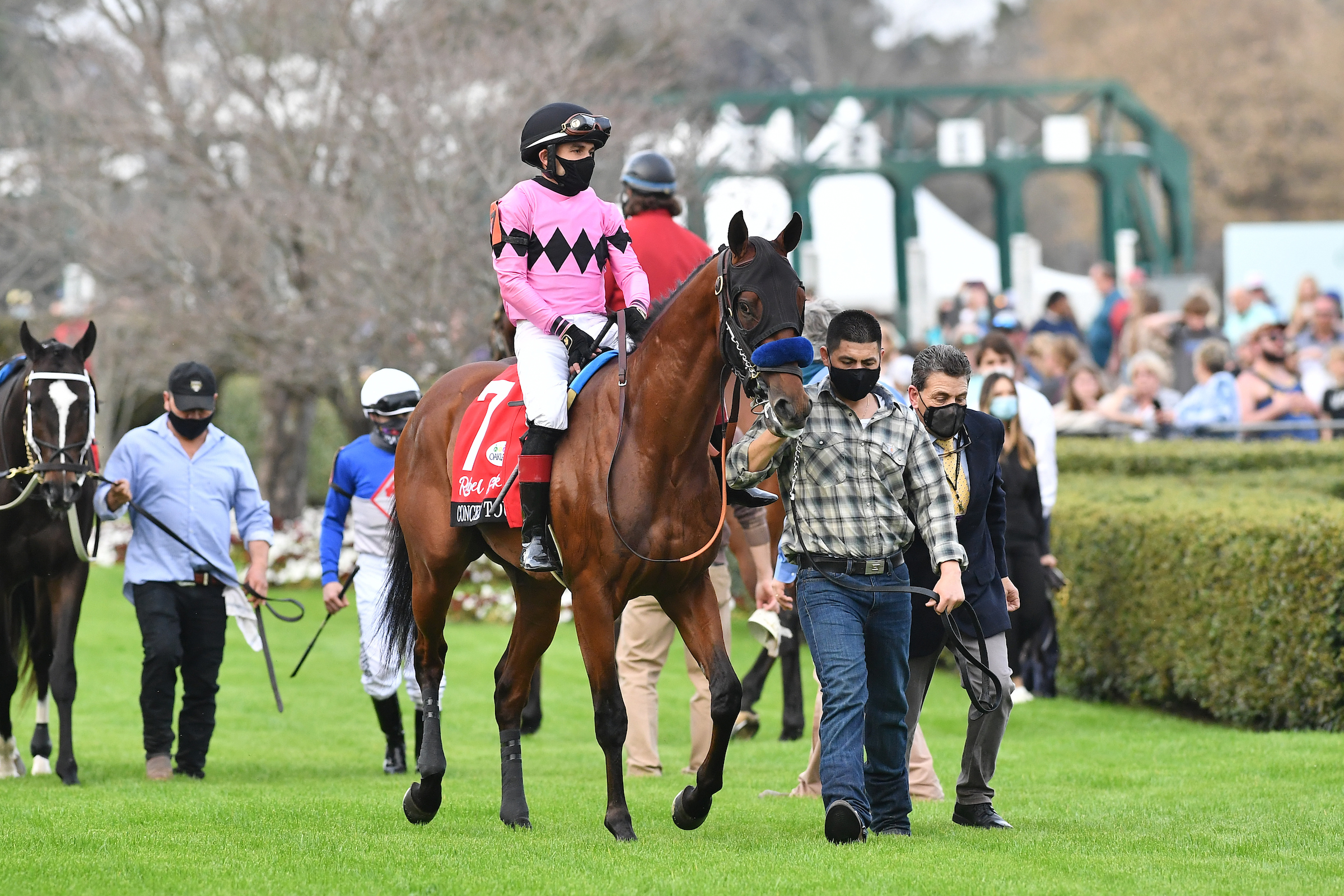